I traveled to Iceland last year to photograph Mai and Kenny’s adventure engagement session. Being there as a photographer was a like a kid in a candy store; there was so much to hike and explore. We landed in Reykjavik and met at the Skogafoss and Seljalandsfoss waterfalls to start our adventurous couple’s photo shoot. We traveled together and photographed some of the top locations in Iceland from the glacial lagoon of Jokulsarlon to the black sandy beach of Reynisfjara with the most epic sights. After we finished our travel, I went back to the hotel. I was up until around 2a.m. still taking photos looking around, learning about the area. I went out to photograph the sky, and I saw green lights after I captured a few images. Even though it was cloudy and somewhat rainy, I saw a glimpse of the northern lights, Aurora Borealis. I texted Mai and asked if she would be up for a drive to the Jokulsarlon lagoon for a northern lights epic photo about 30 minutes away? She got Kenny and we drove about 30 minutes to the glacial lagoon for a few night photos. It was pitch dark in this new area we’d never been. We starting hearing noises in the water moving around the glaciers with icebergs everywhere, not sure what creature was roaming around us, but I’m not going to lie, it was a little scary. We were in the dark somewhere we had never visited in the daylight. Additionally, we were the only ones there at 2:30a.m., but it was no doubt adventurous.

After the engagement session ended, I left and traveled to as many destinations as I could hike and explore in the next few days. I traveled off-road in my tiny rental Toyota Yaris, and hiked near the Skaftafell Ice-caves at Vatnajokull National Park where they filmed Batman scenes at the glacier. I then drove to Gullfoss waterfalls at midnight, very slippery and dangerous in November. I caught myself on a few slips. After that, I headed for dinner at the local hostel for pizza, enjoyed a nice sleep.

I traveled north for hours visiting different areas of interest, eating a restaurants where it was oddly quiet, talking to locals around the areas. On my way back in the later evening, I pulled off to a side road leading to the beach. As I approached the beach, my car got stuck, felt like my car was stuck in quick sand.  I was in black sand with water everywhere, I took a wrong road. I kept peeling out, reverse, drive, back and forth, moving my wheels. Turn the car off, collect my thoughts. It was pitch dark again. I figured I would probably sleep in my car until morning and wait for help or maybe find help that evening by walking back to the main road. There was also another car with the lights out that I passed, not sure if anyone was in it. So I decided to get back in my car and attempt again to get out, this time, bouncing the car, quickly going from reverse to drive while moving the front wheels, rocking it to get out, and finally, my car jumped out of the sand, and back I was on the road.

After my travel, I headed back to the airport, stopped by the famous Blue Lagoon, where I enjoyed a nice relaxing dip in the massive hot springs, a facial mud-wrap, and dinner. My hope is to photograph a wedding or elopement there soon, and when and if I do, I will be returning to the Blue Lagoon.

For now, enjoy some of the images from Mai and Kenny’s adventure engagement session. 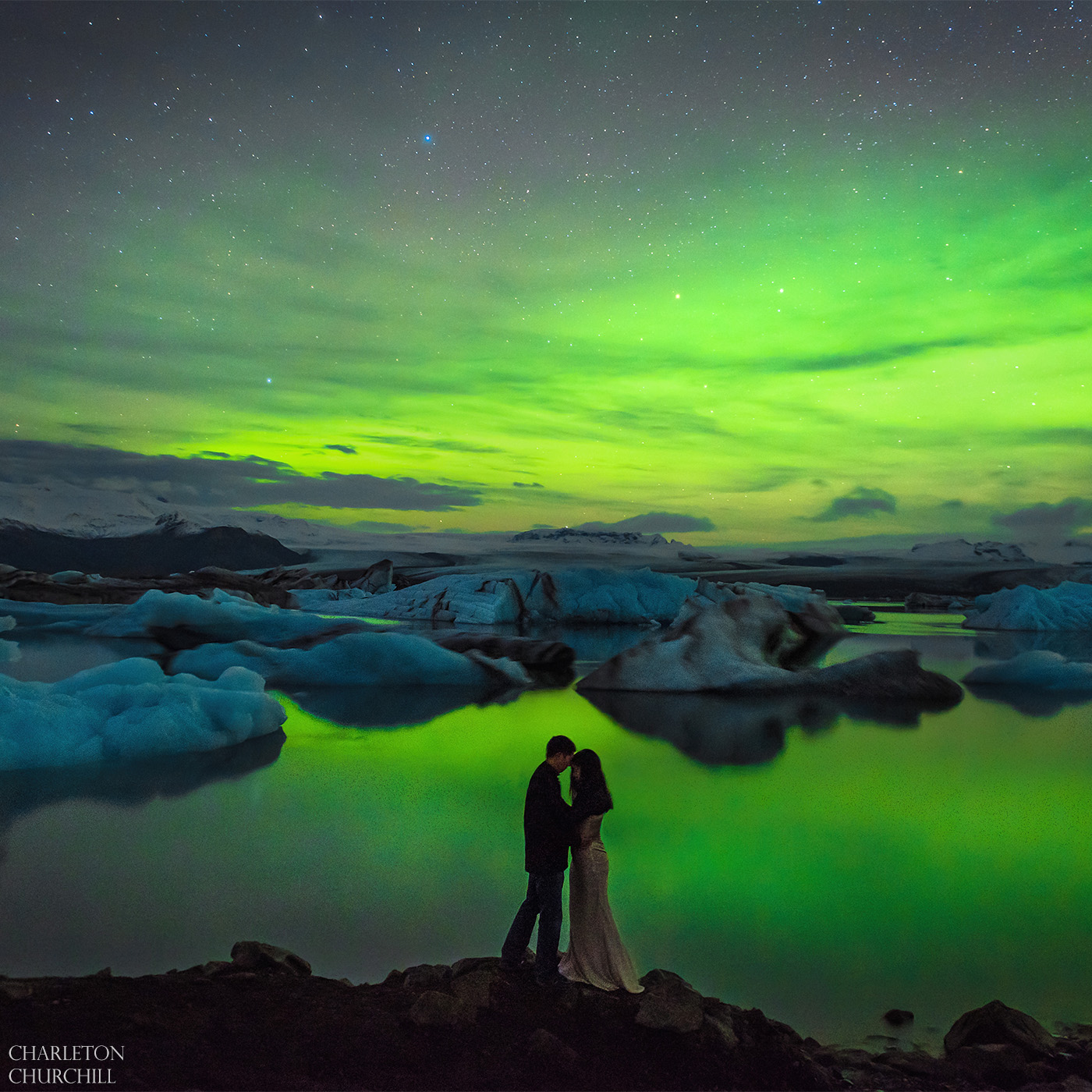 ABOVE: We drove together at 2a.m. to get an image in the dark with the northern lights peering in the sky. We scored this image because the rest of the week, it was raining,…the Aurora Borealis never returned. There was a guy I was talking to at the hotel 30 minutes away who was like,…”I’ll wait until tomorrow night when it’s more clear.” Well, that never came, he missed his opportunity.